I’m always pretty sceptic of probiotics as they tend to be over-marketed and full of weird stuff which upsets my IBS more than helping it, so when I was approached by Symprove to take on their ’12 Week Challenge’ I was intrigued to see how this probiotic might differ from the rest. 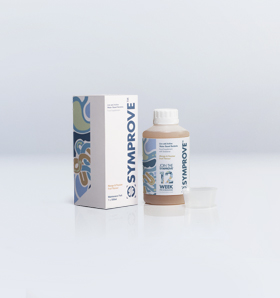 Take the leading product in probiotics – Yakult. Yakult alone has narrowed my view on probiotics as a healthy source of gut health. One small bottle is packed full of reconstituted skimmed milk (terrible for IBS sufferers who are triggered by dairy), glucose-fructose syrup (unhealthy and causes flare-ups due to the concentrated sugar), more sugar, flavourings, and then loads of added bacteria (because how else would they market it as healthy??).

Now compare this with Symprove and you’ll see why I was happy to try this probiotic.

Firstly, all the products are dairy-free and gluten-free. There’s also no sugar, just natural flavourings and sweetener (only a small percentage). There are 4 unique strains of live activated bacteria in each helping as well as extract of germinated barley (I love barley – it’s so great for my IBS personally).

These special cultures have been expertly chosen by the guys at Symprove because they know what your body needs. Your body doesn’t need glucose-fructose syrup or skimmed milk, but what it does need is these 4 bacteria which a healthy gut would already contain. They’re super strong and can withstand the acidic and hostile environment in your stomach.

They are also designed to restore gut health, not trigger digestion (which causes irrational muscle spasms) so that your worst affected areas are nurtured rather than being battered into submission. 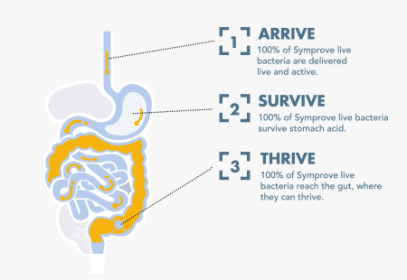 So how did I fare on the 12 week challenge?

No noticeable improvements yet, but that’s to be expected, and it’s still a bit of a chore to overcome the yeasty taste to it. I’ve experienced a regular flare-up or two during this first week which I’ve had to deal with in the same way as normal. I’m still optimistic though.

Getting used to drinking the product a lot more now. The cramps that I typically get around half an hour after eating have eased a little, although they are still present if only slightly. High fibre foods seem to be dealt with much better in my digestive system, whereas before they just caused huge bloating spasms. I can notice a difference, but I’m not completely sold yet.

The cramps have continued to cease and flare-ups, whilst they are still happening, are around 20% of what they usually are. I’m only bloating at the end of the day after my main evening meal, whereas before I’d bloat after every morsel throughout the day. Starting to notice a difference.

It’s become quite the routine waking up and taking a cup of Symprove. The flipping over of my stomach muscles and the large aches I’d get down my left side after severe cramping hasn’t happened for several weeks. I’m also noticing I’m not suffering with gaping episodes of hunger anymore, previously brought on by fears of eating.

I feel so much better for using Symprove and most of my symptoms (apart from minor bloating) have pretty much completely stopped. It’s easy to work a normal happy eating regime around the probiotic now and I’m no longer fearful of eating or spend all my time predicting when the next flare-up will be.