As a child, I think bowling places were pretty much the worst place for food. On par with kids swimming pool centres, the food was also wayyy too greasy, everything fried and beige, and almost definitely out a packet. So as it goes, in adult age I actively avoided going to bowling places to even have a snack, let alone a full sit-down meal.

However, All Star Lanes in Manchester isn’t your traditional bowling alley – it offers a full restaurant experience that serves excellent fresh food that meets the standards of some of Manchester’s best eateries.

As soon as you walk in you know this is bowling gone cool – a huge complex with a great bar area and loads of separate seating for the restaurant (rather than just a few chairs and a table in the foyer). For starters, I had lime-cured scallop and shrimp. Easily the freshest fish I have ever tasted and not too salty, these little delicacies were pop in the mouth perfection.

For the main I had a soft tuna taco with a mango, pineapple and chilli salsa. The tuna steaks were so tender and were seared to absolute perfection in an indoor barbecue they have on sight – something I’d never tried before. And of course, I had to have sweet potato fries. 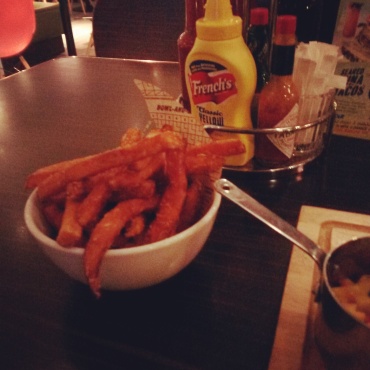 As my IBS had been troubling me that day, I was a little worried about going out to eat. Eating out is usually a nightmare because chefs tend to over-salt and over-oil their food to make it taste more incredible than what you’d make at home – which is a massive problem for me. 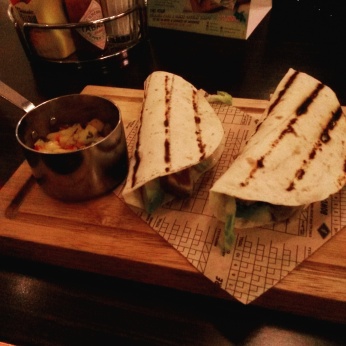 Thankfully, All Star Lanes seasoned their fish to perfection and none of it affected my IBS whatsoever. In fact, it probably balanced out the spasms that had been hurting me all day. Rather than feeling heavy and lethargic after eating this meal, I was optimistic and satisfied, which very rarely happens after eating out. I massively recommend All Star Lanes to anyone looking for fresh, wholesome food, delightfully followed a great big slab of after-dinner entertainment all in the same venue.

Savour the food, sample the signature cocktails, and merrily bowl to your heart’s content. There aren’t many places in Manchester with such an amazing triple threat as this… give it a go for a great night out, weekday or weekend!