Skip to content
Thankfully, there is Chobani, a gorgeous Greek yogurt which has been triple strained and yields all of the healthy bacteria and ample amounts of protein per thick spoonful.

I think it’s fair to say there are a lot of mixed messages shrouding the yogurt industry at the minute.

It turns out many “Greek-Style” yogurts are just once strained yogurt with a whole load of starches and additives included to make it thicker and none of the healthy bacteria it should have (hence the ‘style’ part of its name, i.e. it’s not really Greek yogurt at all). 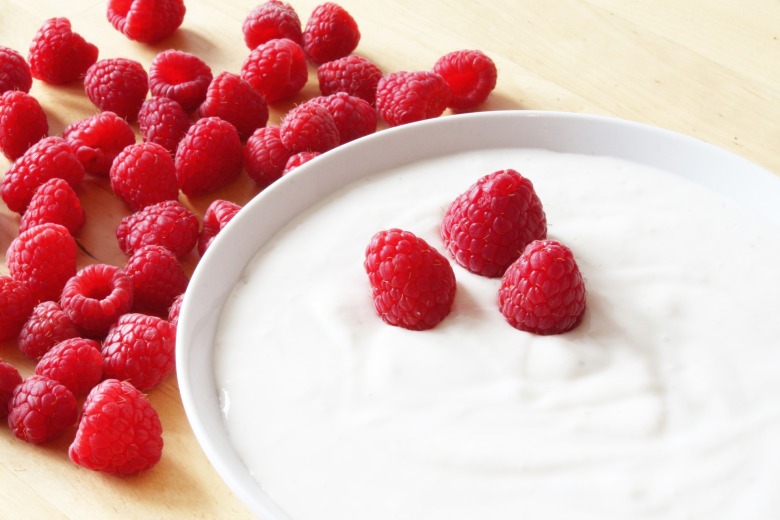 Thankfully, there is Chobani, a gorgeous Greek yogurt which has been triple strained and yields all of the healthy bacteria and ample amounts of protein per thick spoonful. This is how yogurt should be – but not everywhere sells Chobani (I’m still waiting on it to emerge in the UK again).

Really really thick, Siggi, the company who makes ‘Skyr’ yogurt are hoping to bring Icelandic-style into the aisles and perhaps overtake the Greek and Greek-style yogurts currently dominating.

How is it different?

Thicker – Skimmed milk is incubated with live active cultures and the whey is strained (the water from the milk is taken out) so that you get that thickness you expect of a high quality yogurt. Some even say you have to almost slice into it it’s that incredibly dense.

More protein – As a result of the straining process, more protein is piled in than that of a standard yogurt (around 2/3 times more) and around ½ more protein than a Greek yogurt.

Better for baking – Due to its increased density, this Icelandic-style yogurt is a great substitute for other thick dairy products, such as high-calorie butter or sour cream, as well as full fat milk. Greek yogurt is typically very good at replacing full fat milk in dishes, so both Icelandic and Greek can be used for a whole range of recipes.

Ideally, we’d live in a world where Greek yogurt was always triple strained and only contained milk. Unfortunately it’s not and there’s a lot of mistrust cropping up regarding these products. The Icelandic-style yogurt Skyr, being the only one in it’s field is a definite healthy choice and a great dairy substitute. Really, it’s down to individual preferences. If you like the creamy texture of Greek, go for Greek. If you prefer the thicker and more indulgent texture of Icelandic, go for that. But it’s always important to check the label and not get caught out by Greek-style non-healthy versions!